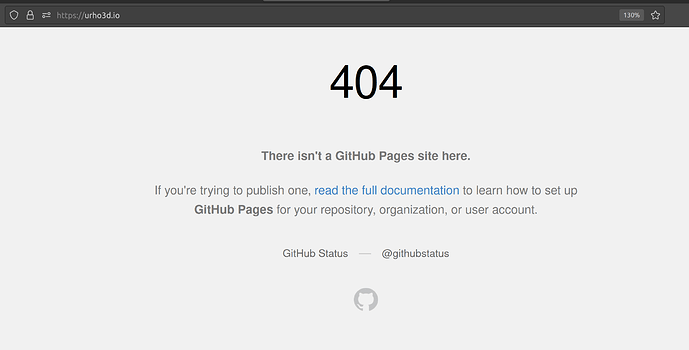 Still can’t believe what you have done to that project!

I don’t quite understand, you don’t want to see my contribution to the engine but want to keep using the engine with my changes, just use this https://github.com/u3d-community/U3D

Moreover, there is a friendly atmosphere and everyone loves each other: https://github.com/u3d-community/U3D/blob/master/CODE_OF_CONDUCT.md

True, they immediately violated their own rules by banning me for the phrase

Can you compete with fork LucKey Productions / Dry · GitLab ?
This is also a victim of my dictatorship. I think cooperation will double your progress.

documentation is gone. I was using that. good thing I downloaded a few html pages. and google has cached versions

I don’t quite understand, you don’t want to see my contribution to the engine but want to keep using the engine with my changes

The people are fine with the good things you made in Urho3D (like Angel Script bindings).

The people are unhappy because you took over Urho3D organization, removed its founders (Lasse and Wei Tjong), and replaced Urho3D with your personal project. You can as well rename it, because GitHub - urho3d/urho3d: Игровой движок is not Urho3D anymore. If it is not in English, it is not Urho3D – the change is just too fundamental. It may be a good project, but it is a different project.

So… yeah. I can totally understand why people are unhappy.
I am just happy that I moved away from Urho3D years ago and these events didn’t hurt me personally.
I will try to stay away from this topic from now on, just wanted to have this opinion written somewhere.

We have already discussed these things in private, but if you decide to re-discuss this publicly, then I can do it with a mention of all the facts in which you and Rokas are involved.

Oh okay, I see it now

In any case, it’s fun to see you pretend to care about the project in public.

I think you misunderstand or misread what I said:

I am just happy that I moved away from Urho3D years ago and these events didn’t hurt me personally.

I am not a user of Urho3D, I have not done anything good or bad for Urho3D in latest years. I don’t really care about Urho3D or its future. I am just an observer here, following updates out of curiosity.

And sometimes I have an opinion on news that don’t directly involve me, that’s it.
In the end, I can have whatever opinion I want, as long as I don’t force others to indulge it.

Okay, okay, the main thing is that you didn’t forget to mention that you left to another great project.

I personally think that this specific project is dead , people will continue to fork it for educational purpose only and not more than that.

This is a bit off topic, but I’ve been meaning to ask you.
What are your plans about Urho.Net now?

Still working on it in a full pace.
.NET 6 is already supported on desktop (Linux,Window,MacOS) , Android , iOS
I have some difficulties to complete .NET 6 for browsers
Working on some new games
Working on my Editor
I guess I will have to write some documentation for others to use it

an educated guess of mine , the Russians have now other worries on their mind

There is no need to start political discussions here. Life in Russia has not changed much. But I have heard a lot about how you restrict yourself in Europe in terms of heating and hygiene. Also, the Americans fulfilled their plan to deindustrialize Europe. It’s ridiculous to say that Volkswagen is now an American company.

Why this stream is banned on twich?
https://www.youtube.com/watch?v=jdAgzIQ7uiI